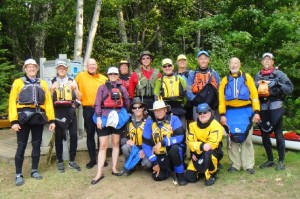 Our 2016 Apostle Islands trip was planned for three nights in August on Sand  Island Group Site “C,” August 18, 19 and 20. Prior to launching from Little Sand Bay, we drove to Meyer’s Beach and paddled to the mainland sea caves. Paddle conditions were outstanding with very calm water and water temperatures in the high 60’s. A few dozen paddlers were on the water in a variety of single kayaks, tandems, sit-on-tops and paddle boards.

After touring the mainland sea caves, we drove to Little Sand Bay, packed all our gear and paddled approximately 3.5 miles to Sand Island group site “C,” just north of the ranger station. The site has been developed as an accessible group camp site with a large wooden deck structure for tents, picnic tables, fire pit and large steel food storage boxes. Raised wooden walkways are partially constructed to an adjacent individual camp site and an outhouse. The wooden walkways will be extended to the the new dock facility, which is currently under construction. Early Friday morning rainfall ended after breakfast.

Friday’s main paddle event was a visit to Raspberry Island. After paddling around the north side of York Island, the group landed on the Raspberry Island sand beach and hiked to the lighthouse facility for lunch and a tour. Ranger Fred provided an outstanding tour of the luxurious light keeper’s quarters and lighthouse grounds. After returning to Sand Island, some of the group explored the Sand Island sea caves for evening photo opportunities while others relaxed in camp and prepared dinner. Lake Superior was relatively calm and warm.

Saturday morning rainfall persisted and came with a forecast for building winds and waves with the potential for 4-6 foot waves on Sunday morning. Given the forecast for continuing rainfall and challenging wave conditions, the group decided to break camp and head back to the mainland on Saturday instead of Sunday. Some of the group returned to the Sand Island sea caves for a short visit and the entire group crossed back to Little Sand Bay in pleasant rain and slowly building waves. After packing wet gear, the group dried off and enjoyed lunch at Maggie’s in Bayfield before driving home.

Some of the participants have shared their photos from the trip: Jim Pechous trip photos

Read Dave Horst’s reflections on past trips to Sand Island, and others. (The photo above shows the 2015 group.)